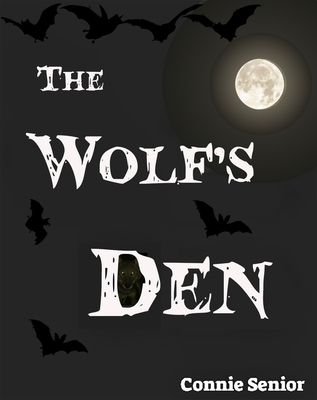 By Connie Senior
$16.99
Not Yet Published

At seventeen, Caleb O’Connor left the isolated island in Maine where he grew up, fleeing tragedy and determined to find a place where a werewolf could run free. For six years he led a werewolf pack in Romania and raised a “cub” as his own son. When the moon wasn’t full, Caleb’s mentor taught him how to harvest the magical powers of the elements, stars, and planets and schooled him in the art of vampire-hunting.

In The Wolf’s Den, Caleb returns home to Bar Harbor, Maine after his mentor’s death at the hands of a vampire. He soon learns of trouble brewing there—mysterious deaths that make him suspect nefarious vampires have infiltrated his home town. Caleb must confront a gang of werewolf bikers, secretive government agents, and vampires preying on tourists, as well as the unsolved deaths of his two best friends.

Caleb needs all the help he can get to stop his vampire nemesis from enslaving humans in the middle of tourist season. Caleb’s gang—his adopted teenaged werewolf son, an orphaned werewolf cub, his only remaining childhood friend, and the guardian who raised him—join the battle. Help comes from unexpected quarters as Caleb fights to right past wrongs, make peace with the wild werewolf pack, and defeat the vampires. Who is an enemy and who is an ally? Caleb must figure this out before he loses more people he loves.

Connie Senior writes fiction because she can’t help it. She wrote her first story, “The Haunted Space Station,” in third grade. Since then, she has worked as an environmental engineer and technical editor, but hasn’t stopped spinning stories in her head: days spent on science, nights spent crafting drama between werewolves and vampires. The Wolf’s Den is her second book, a sequel to Only the Moon Howls. She lives in Denver, Colorado, with her husband a couple of elderly cats.
Like us on Facebook
Follow us on Twitter
Follow us on Instagram