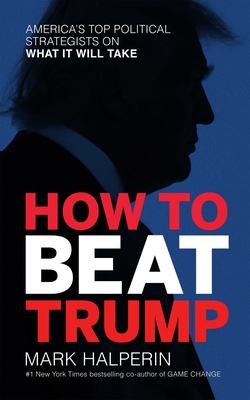 "Sacrifices must be made, not just for the party, but for history"

MORE THAN 100 MILLION ANXIOUS AMERICANS WANT TO KNOW: HOW CAN DONALD TRUMP BE BEATEN IN 2020 AND EVICTED FROM THE WHITE HOUSE?

Mark Halperin interviewed the nation’s most experienced political strategists to discover what they think the Democratic nominee needs to do to win the 270 electoral votes required for victory. Drawing on first-hand experience, tactical savvy, and war stories from presidential campaigns past, America’s top operatives explain how to meet the daunting challenge of defeating President Trump. They provide expert advice on bracing for psychological battle, understanding Trump’s voters, picking a running mate, mastering the debates, and dodging black swans—time-tested and creative ideas that reveal the secrets every presidential hopeful wants to know, with specific insights on tackling the volatile, unpredictable force of nature that is Donald Trump.

While endlessly controversial, the 45th president remains one of the most formidable political campaigners in modern history, with a staggering financial advantage and powerful allies. Only four elected incumbent American presidents have lost reelection bids since 1900.  Few of the strategists think beating Trump will be easy. But none believe it is impossible. Their best ideas, gleaned from years of experience at the highest levels of American politics, are all presented in this compelling and fast-paced book.

HOW TO BEAT TRUMP will give voters tools to evaluate which candidates are best positioned to defeat the incumbent.

Mark Halperin has covered every American national election since 1988, working as a host, correspondent, reporter, and analyst for NBC News, TIME magazine, Bloomberg News, Showtime, and ABC News. He is the co-author of two New York Times #1 bestsellers, “Game Change: Obama and the Clintons, McCain and Palin, and the Race of a Lifetime” (2010) and “”Double Down: Game Change 2012” (2013). He is also the author of “The Undecided Voter’s Guide to the Next President” (2007), and the co-author of “The Way to Win: Taking the White House in 2008” (2006). He is the author of the daily newsletter “Wide World of News.”
Like us on Facebook
Follow us on Twitter
Follow us on Instagram