Stopping by Woods on a Snowy Evening (Hardcover) 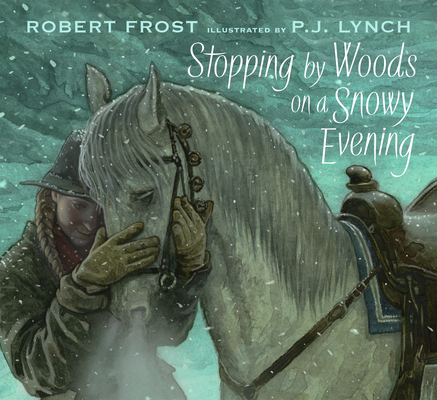 Stopping by Woods on a Snowy Evening (Hardcover)


Email or call for information on special ordering this title
Just in time for its centennial, Robert Frost's cherished poem is showcased in a beautiful keepsake edition illustrated by the award-winning P.J. Lynch.

Whether memorized by schoolchildren or used to eulogize a president, “Stopping by Woods on a Snowy Evening,” written in 1922 and published in 1923, has found a place as one of the best-loved and best-known American poems of the last hundred years. Now, six decades after the passing of its author, Robert Frost, celebrated artist P.J. Lynch brings this classic to new life with exquisitely detailed illustrations, evoking its iconic moments and wintry setting on the outskirts of a small village.
Robert Frost (1874–1963) was an American poet whose work typically depicted rural early-twentieth-century New England. His most well-known poems include “Acquainted with the Night,” “After Apple-Picking,” “Birches,” “Fire and Ice,” “Mending Wall,” “The Road Not Taken,” and “Stopping by Woods on a Snowy Evening,” which the poet once called “my best bid for remembrance.” During his lifetime, Robert Frost received the Congressional Gold Medal, was a four-time recipient of the Pulitzer Prize for Poetry, and was nominated thirty-one times for the Nobel Prize in Literature.

P.J. Lynch is the author-illustrator of The Haunted Lake and The Boy Who Fell Off the Mayflower, or John Howland’s Good Fortune. Meticulous research informs all of his illustration work, which includes such acclaimed picture books as The Christmas Miracle of Jonathan Toomey by Susan Wojciechowski, A Christmas Carol by Charles Dickens, ’Twas the Night Before Christmas by Clement C. Moore, and When Jessie Came Across the Sea by Amy Hest. P.J. Lynch has received the Kate Greenaway Medal twice and the Christopher Medal three times. He lives in Dublin, Ireland.
Lynch illustrates Robert Frost’s classic poem with moody, snow-filled watercolor and gouache landscapes. . . . Rendered in a palette of blues and greens, Lynch’s illustrations artfully match the quiet, building depth of Frost’s work.
—Publishers Weekly

Lynch has done a marvelous job slowing the pace of the poem down by spreading its text out in small pieces and augmenting the rich language with illustrations, which will make it easier to absorb the sensory details so quietly evoked by the words. . . . a gorgeous rendering that will bring the poem to life for a new generation and even encourage young poets to stop and notice their world with a lyrical, illustrative lens.
—School Library Journal

The value of a book like this is that it introduces young children to a poem they will almost certainly encounter again, inculcating a fondness that should later feel like warm recognition.
—The Wall Street Journal

This picture-book features stunning images by award-winning illustrator P.J. Lynch that bring the wintery words to life. Just in time for the beloved poem’s centennial, the detailed illustrations will evoke the poem’s timeless snowy setting on the outskirts of a small village, and might even have your kiddo reciting its iconic lines in no time.
—Romper