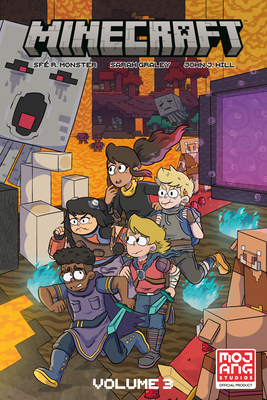 
On Our Shelves Now
The third graphic novel installment in the Minecraft series of books, based on the world's best-selling videogame Minecraft!

Candace, Evan, Grace, Tobi, and Tyler continue their adventures in the world of Minecraft and find themselves stumbling upon a mysterious ruined portal. Arriving to a strange and wonderful corner of the Nether that they've never seen, the group turn to their Nether expert, Grace, for help. However, as they face new threats, Grace finds that the team's reliance on her in the Nether is hitting a breaking point! The group discover themselves deep in a bastion and now have to face their most intense challenge yet...without their expert. It'll take the full force of the entire group to overcome the unknown!
Sfé is a queer Canadian comic artist living divided between the east coast (Halifax) and west coast (Vancouver) of Canada.

Sfé writes, draws, scripts and designs characters, comics, and stories for both personal and collaborative purposes. Some of Sfé's projects include Eth's Skin (a genderqueer webcomic about mermaids, selkies and sea monsters living on the west coast of British Columbia), and The Beyond Anthology (a queer sci-fi/fantasy comic anthology), as well as other comics like Kyle & Atticus, and Seven Stories From The Sea.

Sfé's work focuses on gender, queerness, genderqueerness, and a strong sense of all things Canadian. Sfé is a hockey fan, a monster enthusiast, and plays a mean game of Tetris.