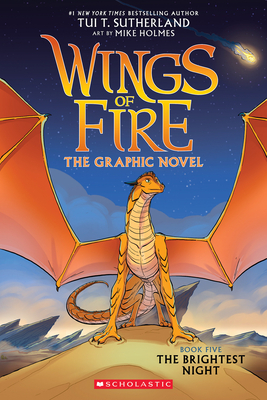 
On Our Shelves Now
The graphic novel adaptations of the #1 New York Times bestselling Wings of Fire series continue to set the world on fire!

Sunny has always taken the Dragonet Prophecy very seriously. If Pyrrhia’s dragons need her, Clay, Tsunami, Glory, and Starflight to end the war, she’s ready to try. She even has some good ideas how to do it, if anyone would listen to her.

But shattering news from Morrowseer has shaken Sunny’s faith in their destiny. Is it possible for anyone to end this terrible war and choose a new SandWing queen? What if everything they’ve been through was for nothing?

Buried secrets, deadly surprises, and an unexpected side to scavengers are all waiting for her in the shifting sands of the desert, where Sunny must decide once and for all: Is her destiny already written?

Or can five dragonets change their fate and save the world . . . the way they choose?

TUI T. SUTHERLAND is the author of the New York Times and USA Today bestselling Wings of Fire series, the Menagerie trilogy, and the Pet Trouble series, as well as a contributing author to the bestselling Spirit Animals and Seekers series (as part of the Erin Hunter team). In 2009, she was a two-day champion on Jeopardy! She lives in Massachusetts with her wonderful husband, two awesome sons, and two very patient dogs. To learn more about Tui's books, visit her online at tuibooks.com.

Mike Holmes has drawn for the comics series Bravest Warriors and Adventure Time and is the creator of the art project Mikenesses. His books include Secret Coders (written by Gene Luen Yang), Animal Crackers: Circus Mayhem (written by Scott Christian Sava), and the True Story collection. He and his wife, Meredith, live in Philadelphia with their son, Oscar, Heidi the dog, and Ella the cat.

Praise for The Dragonet Prophecy (Wings of Fire Graphic Novel, Book One):

"Fans of the series will be drawn to this visual representation of their favorite characters, as will those who enjoy epic, animal-based fantasies." -- School Library Journal