The Kitchen Knight: A Tale of King Arthur (Paperback) 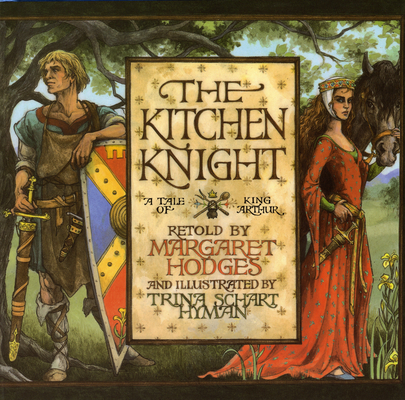 The Kitchen Knight: A Tale of King Arthur (Paperback)


On Our Shelves Now
The creators of the Caldecott Medal book, Saint George and the Dragon, tell the Arthurian tale of Sir Gareth of Orkney's first adventure.

The Knights of the Round Table were in their glory. When an unknown stranger visits the castle and asks Kin Arthur's favor, he is allowed to serve in the kitchen for his meat and bread.

Little does anyone suspect that he is of noble blood and will soon be knighted by the famous Sir Lancelot. Lush illustrations bring the reader into the book, as Sir Gareth meets adventures and battles to free a princess from the fearsome Red Knight of the Plain.

Based on an excerpt from Sir Thomas Malory's Le Morte D'Arthur and in consultation with both the famous Caxton and Winchester texts, this enduring story of gallant knights in armor, epic battles, and quests fulfilled has broad appeal for young adventurers.
Margaret Hodges (1911-2005) was a distinguished children's book writer particularly known for her retelling of traditional folk tales. Her past titles include Saint George and the Dragon, The True Tale of Johnny Appleseed, and Up the Chimney. Her title Merlin and the Making of the King received many starred reviews.

One of the most distinguished and celebrated illustrators of her generation, Trina Schart Hyman (1939-2004) was awarded the Caldecott Medal for St. George and the Dragon, retold by Margaret Hodges, and Caldecott Honors for A Child's Calendar, by John Updike, Hershel and the Hanukkah Goblins, and Little Red Riding Hood. Born in Philadelphia, she lived most of her life in New Hampshire.
"In a style similar to that of Hodges's and Hyman's St. George and the Dragon (Caldecott Medal, 1985), here's a story based on the first part of "The Tale of Sir Gareth of Orkney" as related by Malory--with the help of the new Winchester text published In 1954. Retold with clarity, vigor, and respect for its courtly source, it's a satisfying Arthurian tale of a knightly quest undertaken by a young man whose mettle and noble birth are revealed along the way. With her unique ability to interpret and extend a text, Hyman continues to be an illustrator par excellence: these illustrations have her usual narrative power, incisive characterizations, and beguiling settings....a grand tale in a handsome edition." —Kirkus Reviews


"The dramatic sweep of Hyman's lusty paintings, with their rich details and colors, is enhanced by the occasional placement of a small portrait within a large double-page spread, allowing the viewer to see both the central drama and a reaction shot (for example, the battle and the prisoner watching from her tower). In addition, Hyman uses a less defined line than usual to create a more impressionistic effect. A beautifully illustrated medieval story that concludes with a fascinating source note." —Booklist