The Night Before the Nutcracker (American Ballet Theatre) (Hardcover) 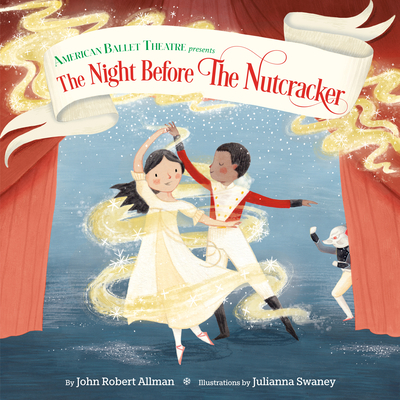 The Night Before the Nutcracker (American Ballet Theatre) (Hardcover)


Usually ships in 2-5 days
Get a front-row seat and experience the excitement of opening night as young dancers prepare for a performance of The Nutcracker. This festive holiday picture book, created in partnership with American Ballet Theatre, is a perfect gift for young readers and dance fans.

’Twas the night before The Nutcracker and, sleepless in their beds,
these budding ballet dancers are rehearsing in their heads.

Children who dream of dancing in The Nutcracker will love this magical illustrated holiday story, told in the tradition of "The Night Before Christmas." Four young girls and boys experience the thrills of auditions, rehearsals, costume fittings, and finally the big event: opening night! It's a behind-the-scenes peek that will delight young dancers.

An afterword with original costume illustrations by Tony Award winner Richard Hudson makes this keepsake picture book both aspirational and informative.
JOHN ROBERT ALLMAN lives in New York City, where he works in marketing for television and theater. He is the author of B Is for Ballet: A Dance Alphabet, Boys Dance!, and The Night Before the Nutcracker with American Ballet Theatre, in addition to A Is for Audra: Broadway's Leading Ladies from A to Z and B Is for Broadway: Onstage and Backstage from A to Z. He was born and raised in Texas, where he was often the only boy in dance class. Follow him on Twitter and Instagram at @Johnny_Allman.

JULIANNA SWANEY is an illustrator, designer, and fine artist whose work is inspired by the themes of imagination, whimsy, and melancholy. Her books include Mermaid School and I Will Always Be Your Bunny. Julianna studied printmaking at Maine College of Art and lives in Portland, Oregon. See more of her work online at juliannaswaney.com and on Instagram at @julianna_swaney.

AMERICAN BALLET THEATRE is one of the greatest dance companies in the world, revered as a national treasure since its founding season in 1940. Its mission is to create, present, preserve, and extend the great repertoire of classical dancing for the widest possible audience. Headquartered in New York City, ABT is the only American cultural institution of its size and stature to extensively tour, enchanting audiences for eight decades in 50 states, 45 countries, and over 480 cities. ABT's repertoire includes full-length classics and contemporary masterpieces. In 2006, by an act of Congress, ABT became America's National Ballet Company®. Find out more at ABT.org, and follow ABT dancers on Instagram at @abtofficial and @ABTSchool, on Twitter at @ABTBallet, and on Facebook at @AmericanBalletTheatre.
“Young balletomanes will clamor to attend a live performance or perhaps aspire to dance themselves.”—Kirkus

"Perfect for sharing with young audience members preparing to see the ballet for the first time, or for those wishing to imagine the wonder from home."—School Library Journal

"Lovely. . . . The verse text rolls along smoothly in a series of well-worded rhymed couplets. Using color sparingly but effectively, the illustrator creates a sense of music within the scenes and even reveals a backstage secret (the stilts under Mother Ginger’s skirt). An appealing introduction to the ballet."—Booklist

"It’s a double bill, introducing both the traditional story and the experiences of its child dancers."—Publishers Weekly

"A Clement C. Moore–inspired rhyming text and lively illustrations offer a tantalizing look at the before, during, and after of “tomorrow’s opening night” for four young dancers. . . . [An] engaging look at the seasonal staple."—The Horn Book