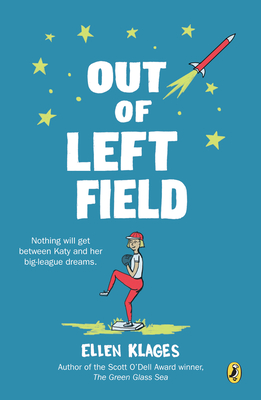 This is book number 3 in the The Gordon Family Saga series.

A story about the fight for equal rights in America's favorite arena: the baseball field!

Every boy in the neighborhood knows Katy Gordon is their best pitcher, even though she's a girl. But when she tries out for Little League, it's a whole different story. Girls are not eligible, period. It is a boy's game and always has been. It's not fair, and Katy's going to fight back. Inspired by what she's learning about civil rights in school, she sets out to prove that she's not the only girl who plays baseball. With the help of friendly librarians and some tenacious research skills, Katy discovers the forgotten history of female ball players. Why does no one know about them? Where are they now? And how can one ten-year-old change people’s minds about what girls can do?

Set in 1957—the world of Sputnik and Leave It to Beaver, saddle shoes and "Heartbreak Hotel"—Out of Left Field is both a detailed picture of a fascinating historic period and a timelessly inspiring story about standing up for equality at any age.

ELLEN KLAGES is the author of two acclaimed historical novels: The Green Glass Sea, which won the Scott O'Dell Award and the New Mexico Book Award; and White Sands, Red Menace, which won the California and New Mexico Book awards. Her story "Basement Magic" won a Nebula Award, and "Wakulla Springs," co-authored with Andy Duncan, was nominated for the Nebula, Hugo, and Locus awards, and won the World Fantasy Award for Best Novella. She is a graduate of Second City's Improv program, and has a degree in Philosophy from the University of Michigan, leading to many odd jobs that began with the letter P (proofreader, photographer, painter, pinball arcade manager). She lives in San Francisco, in a small house full of strange and wondrous things.

* "A grand slam in every way."--Kirkus Reviews, starred review

* "In her newest novel, set against the backdrop of the space race, acclaimed historical fiction author Klages returns in fine form."--Booklist, starred review

"Featuring powerful female characters, this is historical fiction that doesn’t drag for a second."--School Library Journal

"There are writers with unique voices and important things to say about people of all kinds and shapes and minds. Ellen Klages is one of those writers. Ignore her at your peril."—Neil Gaiman, author of Newbery Award winner The Graveyard Book

"Out of Left Field shows us, with heart and precision, what it really takes to make the world change. Katy Gordon is my hero. She's your hero, too."—William Alexander, National Book Award winner

“Heartwarming, fresh, and full of surprises. Readers of all ages will cheer for funny, feisty Katy Gordon as she chases her big-league dreams. Ellen Klages hits this one out of the park!”—Jennifer L. Holm, three-time Newbery Honor recipient

"They say that history is written by the winners. I say hidden histories, like the one ten-year-old Katy Gordon uncovers in this book, are writ large by winning authors like Ellen Klages. A book that's part sports, part rabble-rousing activism, and all around amazing."—Betsy Bird, School Library Journal blogger and editor of Funny Girl

"An intense but accessible page-turner. . . . History and story are drawn together with confidence."--The Horn Book, starred review