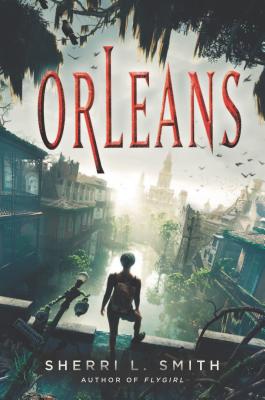 Then came the Fever.

After a string of devastating hurricanes and a severe outbreak of Delta Fever, the Gulf Coast has been quarantined. Years later, residents of the Outer States are under the assumption that life in the Delta is all but extinct…but in reality, a new primitive society has been born.

Fen de la Guerre is living with the O-Positive blood tribe in the Delta when they are ambushed. Left with her tribe leader’s newborn, Fen is determined to get the baby to a better life over the wall before her blood becomes tainted. Fen meets Daniel, a scientist from the Outer States who has snuck into the Delta illegally. Brought together by chance, kept together by danger, Fen and Daniel navigate the wasteland of Orleans.  In the end, they are each other’s last hope for survival.

Sherri L. Smith delivers an expertly crafted story about a fierce heroine whose powerful voice and firm determination will stay with you long after you’ve turned the last page.

Sherri L. Smith (www.sherrilsmith.com) has written several novels for young adults. Flygirl, her first novel with Putnam, won the California Book Award, was a YALSA Best Book for Young Adults, and made it onto 14 State Award Lists.  Sherri lives in Los Angeles, California.

“Orleans itself is a compelling intersection of environmental chaos and human politics. Smith repeatedly reminds readers that this was once a vibrant, stunningly alive place that suffered the ill effects of global warming and yet has still managed to eke out a kind of survival, as grim and unappealing as that survival looks. This version of NOLA reads like a twisted love letter to the original as Smith mines its famous landmarks and traditions for a dark revision . . . Smith’s vision of the future is terrifying because it scarily matches reality in a world where the Doomsday clock moves closer and closer to midnight.”

“In Smith’s compelling and disturbing novel, the Gulf Coast has been formally separated from the U.S. since 2025, after a deadly plague called Delta Fever emerges from the horrific conditions following years of increasingly destructive hurricanes. . . . Alternating chapters of Fen’s strong and often lyrical voice and a third-person account from Daniel’s point of view move the complicated plot briskly. . . . powerful, relevant themes: global warming, racism, political corruption, and the complexity of human nature.”

“Gritty and dark, with plenty of glimmers of humanity, this book screams for a sequel, a trilogy, maybe even a prequel. Chapters written in the well-crafted first-person of Fen’s tribal dialect clash with Daniel’s third-person narrative chapters, but perhaps that was part of Smith’s plan. It is a minor flaw in a book that will fly off the shelves and thrill readers of realistic, as well as science, fiction.”

“Smith imagines a captivating and truly frightening future for the United States, one in which six devastating hurricanes follow Katrina’s path right into the heart of the crippled Gulf Coast. . . . the richly textured worldbuilding and the complicated relationship between Fen and Daniel, as well as the constant and varied dangers they face, will keep readers up long past their bedtimes. A harrowing and memorable ride.”

“Smith effectively tells their stories through both voices: his idealistic, naive, and grammatically perfect; hers, street-wise, in the dialect of the tribes of Orleans. Carefully crafted backstories, revealed throughout the novel, allow readers initially to form opinions and later have these either confirmed, denied, or altered. The bleak, austere setting becomes a tableau for life’s basics: survival and sacrifice, compassion and greed.”
Like us on Facebook
Follow us on Twitter
Follow us on Instagram