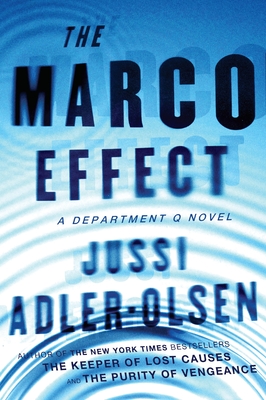 By Jussi Adler-Olsen
Email or call for price.
Backordered

This is book number 5 in the A Department Q Novel series.

A teenaged boy on the run propels Detective Carl Mørck into Department Q’s most sinister case yet in the fifth novel in Jussi Adler-Olsen's New York Times bestselling series.

Fifteen-year-old Marco Jameson longs to become a Danish citizen and go to school like a normal teenager. Unfortunately, his Uncle Zola forces the children of their former gypsy clan to beg and steal for his personal gain. When Marco discovers a dead body that proves the true extent of Zola’s criminal activities, he goes on the run. But it turns out his family members aren’t the only ones who want to keep Marco silent...forever.

Detective Carl Mørck wants to save the boy, but Marco’s trail leads him to a case that extends from Denmark to Africa, from embezzlers to child soldiers, from seemingly petty crime rings to the very darkest of cover-ups.

Praise for The Marco Effect

“This series goes from triumph to triumph...This is the best book I've read in 2014 so far. Highly recommended.”—Deadly Pleasures Mystery Magazine

“Marco is a compelling hero, the villans are truly odious, and Mørck and his quirky, savvy subordinates ultimately carry the day.”—Booklist