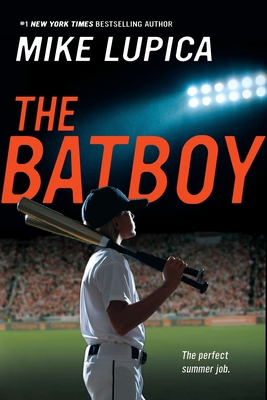 
Will Ship in 1-5 Days from our Distributor
From the #1 New York Times bestselling author of Heat, Travel Team and Million-Dollar Throw.

Brian is living every baseball kid's dream: he is a batboy for his hometown Major League team. Brian believes that it's the perfect thing to bring him and his big-leaguer dad closer together. And if that weren't enough, this is the season that Hank Bishop, Brian's baseball hero, returns to the Tigers for the comeback of a lifetime. The summer couldn't get much better! Until Hank Bishop starts to show his true colors, and Brian learns that sometimes life throws you a curveball.
Mike Lupica is one of the most prominent sports writers in America. His longevity at the top of his field is based on his experience and insider’s knowledge, coupled with a provocative presentation that takes an uncompromising look at the tumultuous world of professional sports. Today he is a syndicated columnist for the New York Daily News, which includes his popular “Shooting from the Lip” column, which appears every Sunday.

He began his newspaper career covering the New York Knicks for the New York Post at age 23. He became the youngest columnist ever at a New York paper with the New York Daily News, which he joined in 1977. For more than 30 years, Lupica has added magazines, novels, sports biographies, other non-fiction books on sports, as well as television to his professional resume. For the past fifteen years, he has been a TV anchor for ESPN’s The Sports Reporters. He also hosted his own program, The Mike Lupica Show on ESPN2.

In 1987, Lupica launched “The Sporting Life” column in Esquire magazine. He has published articles in other magazines, including Sport, World Tennis, Tennis, Golf Digest, Playboy, Sports Illustrated, ESPN: The Magazine, Men’s Journal and Parade. He has received numerous honors, including the 2003 Jim Murray Award from the National Football Foundation.

Mike Lupica co-wrote autobiographies with Reggie Jackson and Bill Parcells, collaborated with noted author and screenwriter, William Goldman on Wait ‘Till Next Year, and wrote The Summer of ’98, Mad as Hell: How Sports Got Away from the Fans and How We Get It Back and Shooting From the Lip, a collection of columns. In addition, he has written a number of novels, including Dead Air, Extra Credits, Limited Partner, Jump, Full Court Press, Red Zone, Too Far and national bestsellers Wild Pitch and Bump and Run. Dead Air was nominated for the Edgar Allen Poe Award for Best First Mystery and became a CBS television move, “Money, Power, Murder” to which Lupica contributed the teleplay. Over the years he has been a regular on the CBS Morning News, Good Morning America and The MacNeil-Lehrer Newshour. On the radio, he has made frequent appearances on Imus in the Morning since the early 1980s.

His previous young adult novels, Travel Team, Heat, Miracle on 49th Street, and the summer hit for 2007, Summer Ball, have shot up the New York Times bestseller list. Lupica is also what he describes as a “serial Little League coach,” a youth basketball coach, and a soccer coach for his four children, three sons and a daughter. He and his family live in Connecticut.

Praise for The Batboy:

“Lupica. . .giv[es] his readers a behind-the-scenes look at major league sports. In this novel, he adds genuine insights into family dynamics and the emotional state of his hero.” –Booklist

“[T]his novel will undoubtedly appeal to those who equate summer with baseball, it should also win over readers who appreciate finely crafted storytelling and engaging characters.” –School Library Journal