She's Got This (Hardcover) 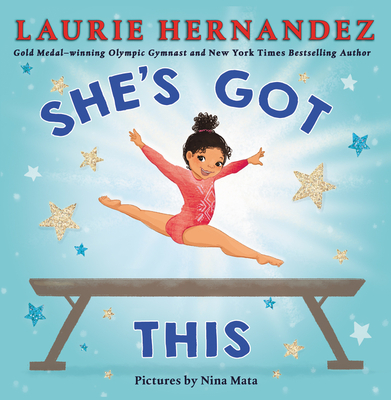 She's Got This (Hardcover)


Will Ship in 1-5 Days from our Distributor

From gold-medal-winning Olympic gymnast and bestselling author Laurie Hernandez comes a picture book about chasing your dreams and never giving up.

Even Olympians have to start somewhere. And in this charming illustrated book, Laurie Hernandez tells the story of Zoe, a little girl who dreams of flying—and becoming a gymnast.

When Zoe sees a gymnast on TV, she realizes that gymnastics is just like flying. But when she first goes to class and falls off the balance beam, she discovers that following her dreams is harder and scarier than she thought.

Through this heartwarming and inspirational story, featuring vibrant art from #1 New York Times bestselling and Geisel Honor-winning artist Nina Mata, Laurie imparts important lessons she learned on her way to Olympic glory: You always have to get back up and try again, and you always have to believe in yourself.

Laurie Hernandez is an American gymnast, an Olympic gold medalist, and the youngest-ever champion on Dancing with the Stars. At the 2016 Olympic Games in Rio, Laurie won silver in the individual balance beam competition and secured gold in the team all-around competition.

Laurie started gymnastics at the age of six because she wanted to experience the feeling of flying. She enrolled at Monmouth Gymnastics in New Jersey, where she met her coach, and they became a winning duo. The turning point in Laurie’s career came in 2014, when her progress was stalled due to multiple injuries. She returned stronger than ever by becoming the 2015 US junior national champion. Laurie’s other career highlights include all-around silver, beam gold, and floor exercise bronze at the 2016 US Olympic Trials, and bronze in all-around, floor exercise, beam, and uneven bars at the 2016 national championships.

Laurie is known for her dazzling floor exercise routines and for her grace and artistry on the balance beam. And she has been nicknamed “the Human Emoji” for her outgoing facial expressions.

Niña Mata is a New York Times bestselling illustrator and received her degree from the Fashion Institute of Technology in New York City. She has illustrated many books, including American gymnast Laurie Hernandez’s She’s Got This, NBA superstar LeBron James's I Promise, and the Ty’s Travels I Can Read series. Niña currently lives in New Jersey with her husband, their daughter, and Tabitha, their cat. Visit her online at www.beautifique.org.